Status: need to design a pre-amplifier and detection circuit, not entirely convinced that enough power can be supplied for a good light effect.

This project is about combining a cheap solar-powered garden light with a simple bat detecting circuit.

The idea is that at night, as bats fly around your garden, their sonar calls are picked up by an ultrasonic microphone inside the garden light which makes it flash at the rhythm of the bat calls. Imagine an array of these lights!

Inside a garden light 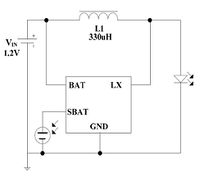 It does this using a surprisingly simple circuit, similar to a so-called joule-thief. People have modded these lights before, e.g. putting different LEDs in it (more efficient, or a different color) and even putting two LEDs in series. 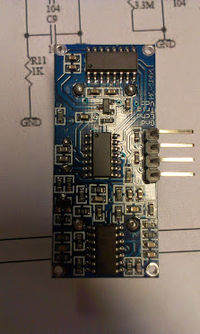 The current idea is to re-use an HC-SR04 "pinger" module. This module can be found on ebay for about 2 EUR and consists of an ultrasonic transducer to send a few pulses at 40 kHz and another transducer to receive the echo. By determining the time between sending a pulse and receiving the echo back, the distance to an obstacle can be determined. But we're not going to actually do that!

There's a very nice analysis and schematic of the circuit at Emil's projects.

The modifications to the module will probably consist of the following: 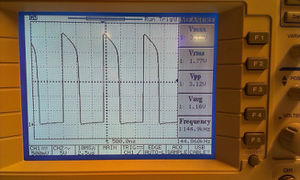 I should find out the following things: 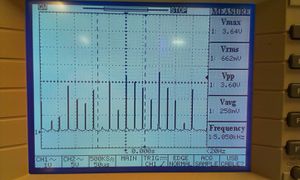 I guess we can drive the LED pretty hard because it will only be on for a small percentage of the time (e.g. typically only 5 percent or so). So, the peak current may be high, making the average current a "normal" value like 10-20 mA or so.

My idea is to charge a capacitor through a resistor and discharge it across the LED as a bat call is received. The value of the capacitor in this RC-circuit is chosen such that the energy contained in it is equivalent to 10-20 mA average when pulsed at 10 Hz, 5% duty cycle. The value of the resistor is chosen such that the C can charge fast enough between pulses at 10 Hz (so, the RC time constant is like 1/3rd the period, or about 30ms).