As a scout leader in a team of 7 we would like to be able to use our power-hungry smartphones all the time and being able to charge every night, anywhere.

I used to work at Muxsan where we upgrade electric cars to have bigger better bad-ass batteries. The battery modules we use are around 1kwh, so it's a match! I took one from an incomplete set and started poking at it. They are 12 rectangular cells, 25 Ah, 1086 Wh, made in Japan in 2015 and it weighs in at 9,8kg. I have been told to not charge them over 4.15V. There is a BMS inside but it doesn't do much without a CAN bus to talk to. All of the protection features normally work by talking to the rest of the car which might for example switch a huge relay to disconnect the entire pack, or show scary errors on the dashboard. But the only car I own does not have a CAN bus. 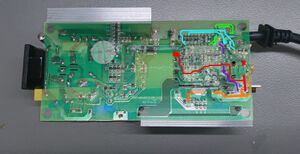 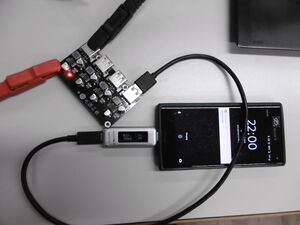 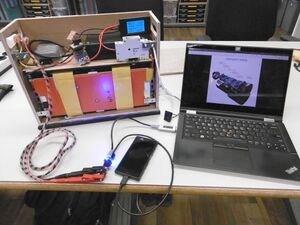 But while searching I found out that must "usb power modules" have a maximum input voltage of around 30V. My battery pack has a voltage between 36V (empty) and 49.2V (full). So I decided that I needed a DC-DC converter to go in between all of this. Benadski of AltPwr helped me and had one of these RC481910 still around so I now have 19V 10A of voltage regulated power available. 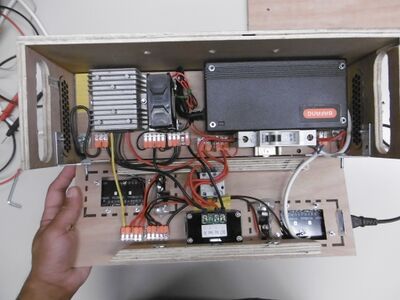 All the parts in the box, more or less

Then there needs to be a display to tell me when the battery is empty. Preferably with as much geeky detail as possible because why not. There is a class of panel mount displays specifically made for batteries. Some variations even come with a relay to do under voltage and other protections, and a large battery symbol on the display! I ordered this SIN9020S one. (File:Monsteraccu-SIN9020S-manual.pdf) 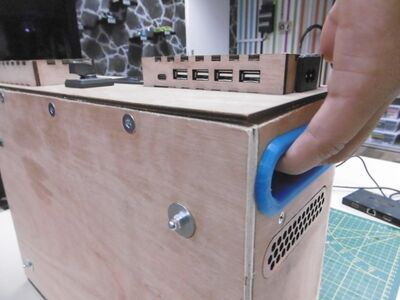 All of these parts deserve to be kept together in a nice hand-made wooden box. Thanks to many other RevSpace participants that helped me learning how to use all the workshop tools and materials! I don't think I would have made it this far without the help I got. I would have probably lasercut something that would fall apart when I'd put it together.

Most of the box is 9mm powerplex but the top part is actually lasercut from 3mm powerplex. This makes the shapes around the USB ports much easier. There is also a thick rubber sheet on the bottom and 3d-printed handle inserts.