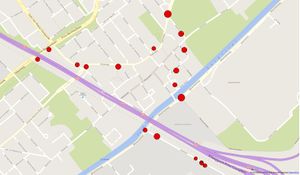 The idea of this project is to create a simple and low-cost WiFi location tracker.

It tracks location by periodically scanning for WiFi station ids, storing those in internal memory and using one of the various location services (google, mozilla, openwlanmap, etc.) to determine a geographical location from this.

This can be used to track various things, for example:

The basic operating principle is this: 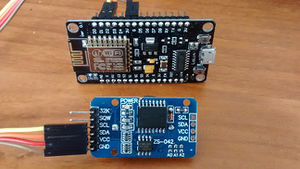 I'm basing this on an Wemos D1 mini. This board is basically an ESP8266-module on a break-out board with an USB-serial converter and a proper 3.3V power supply. The ESP8266 is a WiFi-capable microcontroller, capable of running at 80 MHz, most versions commonly sold have 4 MB of flash onboard with enough spare flash sectors to hold a file system.

To keep time, I'm using a ZS-042 clock module, containing a Maxim DS3231 RTC chip (datasheet). This module is attached to the NodeMCU through the I2C-bus on pins D1 (GPIO5/SCL) and D2 (GPIO4/SDA). I removed the power LED on board the ZS-042 module, since one of my reasons for using an RTC is to save current by keeping the electronics mostly in low-power sleep mode and the power LED wastes current unnecessarily.

I'm powering the ESP8266 directly off a single cell LiFePO4 battery. In particular I'm using a "14500" battery, which has the same dimensions as a common "AA"/"penlite" battery. A single cell of this type outputs about 3.2-3.4V, which is a good match for the ESP8266 voltage requirement of 3.3V.

Possibly the high power consumption during sleep mode can be fixed like discussed here.

Wake up from sleep

Basically I know of two practical mechanisms to save power by going into deep sleep and waking up again:

My prototype software can be found at: https://github.com/bertrik/wifitracker

The software can run in one of two modes, run mode and debug mode.

If pin D5 is pulled low during start-up, the software goes into debug mode In debug mode, it runs a simple command interpreter, type 'help' at 115200 bps to get a list of supported commands.

If pin D5 is left unconnected, the software goes into run mode. In run mode, the device scans APs, saves the result to a time-stamped file in flash memory and goes back to sleep as soon as possible to save power.

TODO: check out https://wiki.bitlair.nl/Pages/Projects/KPN_Hotspots_Autologin and see if I can run it inside an ESP.

I'm thinking of a kind of whitelist/blacklist mechanism to select an AP for uploading data. The plan is to score each scanned AP against this list and then select the one with the highest score, excluding APs which have a negative score. The first match in the list determines the score, so the list is ordered from most specific to least specific. The score is based on network name and encryption type.

This way, we could select and AP on a preference order, for example:

where an entry with an empty password represents an open network.

The ESP wakes from sleep on reset:

The plan is to use JSON for data to be uploaded. The log file is also formatted as JSON, so during upload we can simply upload the log file without further processing. The advantage is that JSON is readable to humans, disadvantage is that it needs more space than a binary format. The log file contains one line per wifi scan, example of JSON:

The device id is the ESP MAC address. Times are in UTC.

The Google Location Service seems to be interested in the channel too (not sure why), we could also log this.

For the settings file, I'm thinking of a simple ini/properties file structure, with KEY=VALUE pairs in it, with empty lines and lines starting with "#" being ignored.

Initial code for the server code receiving uploads from the trackers: https://github.com/bertrik/wifitrackerserver

The server backend receives uploads from the tracker and resolves the WiFi station ids into locations by using a location service, for example:

The MAC address of the ESP8266 should be unique and can be used to identify a specific tracker.

Communication between the tracker and the server is always initiated by the tracker. The protocol is REST (HTTP) and the format is JSON. I'm thinking of writing this in Java, with the use of Jackson 2.0 (JSON), Jersey 2.0 (REST) and Jetty libraries.

The REST service could have two endpoints:

Configuration data can be made specific for each tracker, and could consist of things like:

I've measured the current drawn by an NodeMCU board from the battery under different circumstances.

The NodeMCU deep sleep mode current is a very disappointing, I was expecting a lot lower. Just this current will drain a 700 mAh battery in about a week. Disconnecting the RTC gives a current of 3.3 mA, so most of the deep sleep current appears to be consumed somewhere on the nodemcu board.

This board seems to draw about 0.16 mA in deep sleep mode. Draining a 700 mAh battery would take about 180 days, quite acceptable. 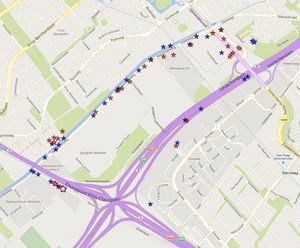 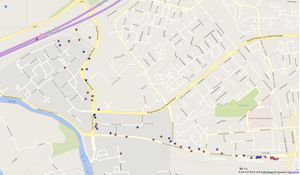 Shown here is a plot of locations from an AP scan done every 10 seconds, while traveling by car from RevSpace (The Hague area) to the train station of Gouda. Locations have been resolved using both the Google geo-location API (blue) and the Mozilla Location Service (red). In total, Google was able to resolve 220 locations, Mozilla was able to resolve 204 locations.