In 1980 one Clive Sinclair from Camebridge in the UK, started to sell a very small simple and cheap computer kit by mail order, he called it the ZX80, (because of the year it was launched, the Z80 CPU it used and because "ZX" sounded mysterious) it met with limited success, he sold about 10.000 of them to "computer hacker" types. It wasn't his first computer kit, previously he had designed, or rather ordered his then design engineer Chris Curry to design the MK14. The MK14 was actually not much more than a clone of the reference design published by the maker of the very early and almost forgotten microprocessor, the SC/MP from National Semiconductor, lovingly called the "scamp" by the few owners of systems using it. Chris Curry later left Sinclair, to found Acorn computing, Sinclair's major competitor!

Clive was the quintessential "eccentric inventor" type, and was often very much ahead of his time, with inventions like one of the first "slimline" electronic calculators, the "Sinclair Executive" and the first electronic watch, the "Sinclair black watch". He was also very much involved with miniaturization, and specifically the miniaturization of a TV set. He had invented a first miniature TV, but because it used a small but standard cathode ray tube the resulting device was indeed small, but still far to large to be put in your pocket (even if it was a large pocket).

Undeterred Clive invented a new kind of CRT, one that had the screen at a sharp angle relative to the cathode ray "cannon". It was a brilliant piece of work, for which he tried to attract outside money, from a state driven program, to finance it's fabrication. Unfortunately the public wasn't ready for it, and at the same time the first LCD's started to appear. The first ones used a milky white liquid crystal, (Dynamic scattering mode display) that only worked for a short amount of time, but later the first examples of the type that used polarization of light was invented, (Twisted nematic field effect) like we use now. The result was that the flow of state capital suddenly dried up, leaving Sinclair with no product and no money.

what to do? creating the first home computer is what he did!

After some brainstorming he decided that computers were the future. Not the hobbyist toys he considered that his earlier machine was, but a real computer for the masses, a "Home computer". But at the time these new kind of computers were very expensive! A typical home/personal computer, like an Apple ][, was thousands of pounds, but even the cheaper and more limited machines, like the UK101, were still many hundred of pounds. This was partly true, because computer memory chips were very expensive. Chips amounting to 4 Kilobyte of memory still went for something like a hundred pound, and with much less memory you could only create a "MK14" type of computer. The MK14 had just a quarter a Kilobyte of memory, yes just 256 Bytes of RAM, and one half kilobyte of ROM! It also used a hexadecimal keypad, and a tiny calculator display for a screen, (borrowed from his calculator projects, which used 3mm high digits with lenses before them to make them look bigger). This made it unattractive for anyone but computer hackers.

Any kind of system that would be able to drive a TV screen, would need at least a byte for each screen location, and a typical (useable) screen of 32x24 characters or so would thus quickly used a large part of a kilobyte (768 bytes). However, for his earlier system the ZX80 his new hardware designer (Jim Westwood) had drawn inspiration from a famous early computer book, (Don Lancaster's "TV Typewriter Cookbook") [3] that described how with a micro controller and a tiny bit of hard and software you could create a video signal. And Jim had come up with his own similar scheme that would only use as much memory as there were characters on the screen. But his solution could either compute, or draw a screen, not both. All it could do while creating video was to sense a key press.

After the ZX80 was released Clive Sinclair realised that this wasn't what people wanted, they wanted pictures that would move on the screen, its what all the competing devices could do. And a capability that all computer games needed, except for a very few ones, like computer chess.

Also, although the ZX80 was very simple, he wanted to further limit the number of components so it could be made even cheaper. His aim was the "magical limit" of one hundred pound, not for a kit but for a ready build device. His famous reasoning went "if you can sell it for a hundred pound, people will impulse buy it even if they have absolutely no idea what to do with it". It also had to look much slicker than his previous efforts, and had to have a less primitive BASIC programming language. So he sent Jim "back to the drawing board", and hired an industrial designer called Rick Dickinson for the new look.

What Jim, and Rick came up with was a truly amazing piece of work, that fulfilled all Sinclair's wishes. And so the ZX-81 was born, and as it name implies, it was launched in may 1981. It was not only sold by mail order, but actually could be bought in main-street shops too. It was an immediate and large success, in the Netherlands even famous audio designers and shop-chain Bang & Olufsen (B&O) sold it (as the "beocomp"). It was what actually triggered the Home Computer Market, at least in Europe. In the end at least 1000.000 were sold, and it lead to it's successors like the famous Sinclair Spectrum, (with thanks for the case and keyboard design leaned from the TIMEX TS1500, one of the many ZX81 clones). 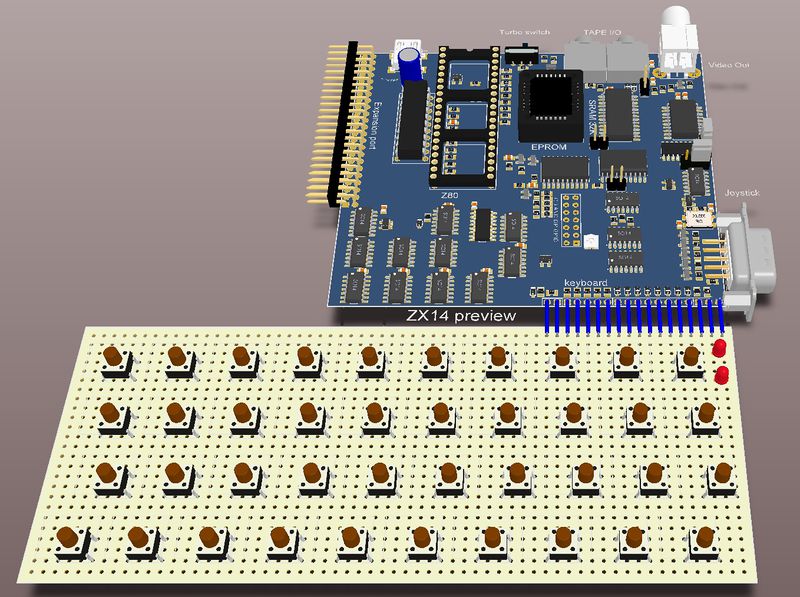 An early preview of the complete ZX14 system, including keyboard. A larger and newer versions can be seen on the new ZX15 project page, here: [1]

Zoom forward for some 35 years, and its 2016. Some people, heavy into computers, still remember their first love, the ZX81. But off course the ZX81 is no longer of this time. Now its the time of the Arduino's and the raspberry PI. Still there is something to say for the old ZX-81, it at least was so simple you could learn to understand (and love) all its intricacies of design, and it was a fully self contained thing, not relying on anything else.

Many others have realized the attraction of the ZX81 and had puzzled to discover its secrets, specifically what is inside its "uncommitted logic Array" (ULA). Rodney knaaps, Andrew Rea, Jack Raats and Wilf Rigter to name just a few. I owe them many thanks.

Early 2014 I endeavored to design my own "modern version" of the ZX-81, with all the improvements I could think off, and using modern techniques and components, I initially called my effort the ZX14, as both a tribute to the ZX80/81 and the MK14 that came before it.

In mid April 2014 when I initially wrote this I already had finished the Schematic, and was starting to design the PCB for it, which I then gambled would fit on a 10 x 10 cm dual sided PCB. I tried that because a 10 x 10 cm PCB is often the largest size that cheap (Chinese) PCB manufacturers can handle extremely cheaply, as in adding one centimeter to the size (10 x 11 cm) will double the price! Also, I was planning to use a standard Eurocard sized perfboard with 1/10" raster for the hand wired keyboard, using cheap 6x6mm buttons for keys.

However during early summer of 2014 I had an accident and spent several weeks in hospital because of a bad leg wound, then had to stay at home, (with help). For more than three months I could not drive to RevSpace to work on the ZX14. That was why it became early 2015 before the layout was finished. I also found out that both ZX14 and ZX15 are Yamaha motorcycles. That is why I decided to rename the prototype ZX81+34.

My calculations have shown that for small numbers of devices, the PCB is the most expensive component. Buy one 15x15cm sized PCB, from a normal manufacturer, and you will pay around 50 euro for one, but this will drop to 25 euro for three, or even to 5 euro if you order a hundred, but most people who want to build one only need one PCB, so I wanted to design one that is as affordable as possible. By limiting the size to 10x10cm I hoped to make it possible to find a manufacturer that can make them for around 10 euro in single units. Happily, but with a lot of effort, I managed to squeeze the design onto a 10x10 cm double sided board.

I'm planning too, (in due course when I feel its completely ready) to freely release all my design documents to the general public, for non commercial use. But do remember that the full rights for the ZX81, and it's ROM still belong to Amstrad, who bought the original design from Sinclair. Luckily I do own the original ZX-81.

Also, the board has still to be tested and debugged, and one problem to be solved is how to program the EEPROM for it, I will probably design an EPROM (or OTP) programmer for it around a raspberry PI, an enclosure is also in the planning stage, probably from laser cut wood. mahjongg April, 2014 to January 2015.

Due to me unfortunately "blowing up" the original first prototype when first powering it up with the input polarity reversed, and numerous faults/problems found afterwards, I decided to give up on the first version, and immediately started a much improved second version, I called (logically) the ZX81+35. After that decision while working on it I also got some help/input from the ZX81 enthusiasts/experts of http://www.sinclairzxworld.com com and http://forum.tlienhard.com which helped improving the design, and finding some more bugs. In the last days of 2015, during the christmas holidays I managed to layout the ZX-81+35. and now I'm busy with creating the other stuff I need like the BOM, and gerber files, so I can build one.

In the future I'm planning to also do my own version of the Sinclair spectrum, I will call Rhococo for "RetroHOmeCOlorCOmputer", it will not really be a spectrum clone, but more an ARM based system using the ideas behind the spectrum. With VGA output.

read more about the effort to get it working here: [4]