Please note that Hoverboards are very dangerous and way overpowered toys. Some of the dangers:

Be careful and NEVER charge a hover board unattended.

I found an interesting talk on Moving Objects by JanHenrik and NiklasFauth: https://media.ccc.de/v/gpn18-95-howto-moving-objects which was very instructive on how to build a software driven movable platform. You could build it with a chair on top or just a sheet of plywood and use it as a transporter. The simplicity of it and the really low price point of broken hover boards got me convinced i should build a movable object!

Broken hoverboards can be bought cheaply. These two (User:F0x got the other one) we purchased for 15 euro's each and were brand new DOA's (dead batteries in both, and one had a gyro issue). So the motors were never used! 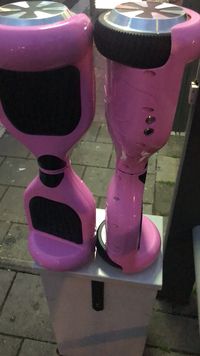 To test the microcontroller and motor-drivers i first made a rig for testing and uploaded the firmware. I could control motor speed with two potentiometers! 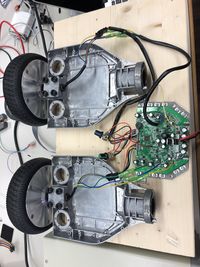 Two sheets of 18mm plywood, 40cmx60cm. Two old caster-wheels in front, the motors in the back. I used the old metal frame to mount the motors and electronics and the pink fenders were reinstalled for extra safety and because they look awesome. The fenders add two safety features: protect a rider from the wheels and in the event of an uncontrollable speed you can just flip it over and disconnect the battery. Metal frame was cut down to size and i cut a few centimeters of one of the plastics to make it fit the 40cm width of the board. 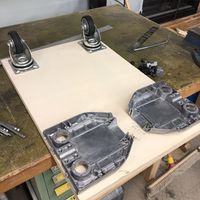 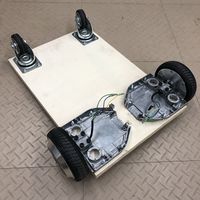 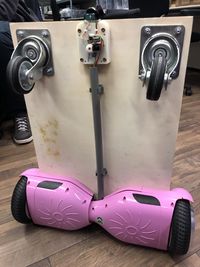 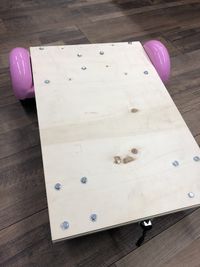 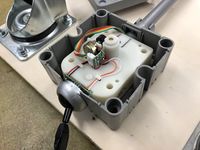 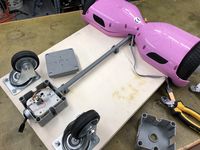 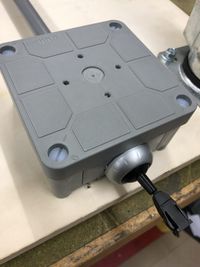 Installed the GameTrak in a nice sturdy box so it's a little bit more safe to use and hopefully this sensor won't break. Next up is an emergency stop!

https://youtu.be/mWy38XpZTqE - My first test with two cases of Mate on top and using the GameTrak sensor.

When riding while someone was controlling the transpotter with the gametrak sensor, the board did two hard rights, the second causing the rider to fall of and nearly smash an arm or some teeth. Luckily the rider was made of rubber and springs ;)

Cause: probably related to the breaking of the gametrak (see below)

Thoughts: software needs to think a bit about sudden increases in speed. Maybe do some more measurements and compare?

Yeah i caused a burnout on the space-floor. The Gametrak broke, and the board went into full power against a post.The damage was done in under ten seconds... 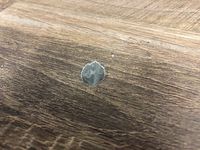 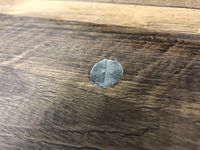 Cause: A disconnected distance sensor causes the motors to go full speed.