Visualisation of citizen-science data by RIVM in the samenmeten project can be found here.

Sensor.community nodes typically provides data at high time resolution, a few minutes, with a 'heartbeat' update of 5 minutes. Some data sources provide relatively stale data, data is only updated once per hour and once the application picks it up the data is already over an hour old. Data sources with such different latencies cannot be combined properly in a single near-realtime image.

This is handled by providing with each image a maximum age of the data. For the Rotterdam visualisation this is a couple of hours (most of the sensor are from the luchtclub project, which has high latency). For the Netherlands visualisation, this is a maximum of one hour, meaning that data from Rotterdam is not visible on the national map.

Since we only have data at a set of discrete points, the concentration at other points is estimated by combining data from all sensors using inverse distance weighting, in particular using the distance *squared* as the weighing factor in a weighted average. So a nearby sensor has a large effect and a far away sensor has a small effect.

New plan to improve the situation of stations with anomalous data having a large influence: 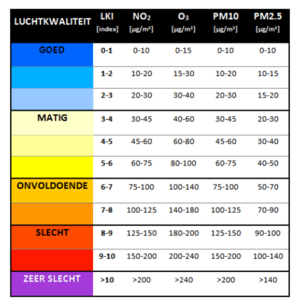 You can click on the GIF animation to view the MP4 animation.