status: it works. We've modified the code to work using an ESP8266 which publishes the measurement data directly on an MQTT stream.

The G, C, D, V signals from the CO2-sensor inside the CO-100 are routed internally to the RJ45-plug, so there's actually no need to open it and solder a connector on the G, C, D, V lines.

This project is about hacking the Voltcraft CO-100 CO2-meter, such that we can read the exact ppm value as displayed on the LCD.

This particular CO2-meter is present in the main space of RevSpace. Having the CO2 ppm value available as a number allows for nice things such as logging the levels over time, announce them on IRC, show them on the LedBanner, fine-grained control of the ventilation system, etc.

The user manual of the Voltcraft CO-100 says "Achtung! Der RJ45-Anschluss (siehe Kapitel 7, Position „K“) darf nicht verwendet werden. Der Anschluss ist nur für den Hersteller vorgesehen." Of course, a claim like that can only be interpreted as a challenge! :) 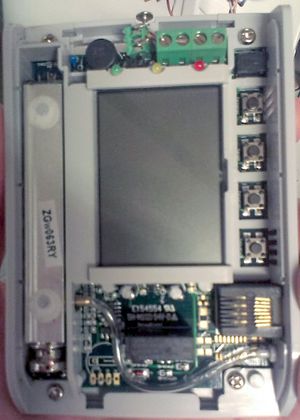 The CO2 sensor inside the CO-100 (in the left of the picture) has a sticker saying ZGw063RY. Googling for this number reveals a CO2 module that looks just like the Voltcraft CO-100, so it appears that the CO-100 is basically a rebranded ZyAura ZGw063RY module.

The CO-100 seems to miss a bunch of components that can be mounted on the PCB, close to the RJ45 connection (most likely an RS232 chip with charge pump capacitors). 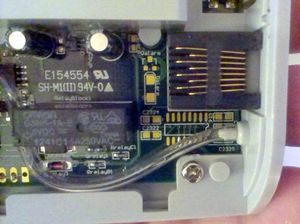 components around the RJ45 connector

http://co2meters.com/Documentation/AppNotes/AN146-RAD-0401-serial-communication.pdf has some information on what looks like a clone/similar device, describing a serial cable for the RJ45, and the protocol used, as well as some info on re-calibration. Commands/Identifiers seem to match.

On the bottom left of the PCB is a set of pads that are marked with G, C, D, V, meaning Ground, Clock, Data, Voltage of the ZG01 sensor. The voltage level on the clock and data pins is 3.3V (the voltage on V pin is 3.3V too).

Besides the CO2 ppm value and temperature, it also sends various other (so far unknown) measurement items.

The ZG-01 module and NRF24L01+ transceiver are connected to the Arduino as follows:

In the ESP version of the CO2 meter, signals from the ZG-01 module are connected as follows:

The basic function of the software on the arduino is to monitor the C and D signals, until a CO2 measurement is received from the ZG-01, then send it using the wireless transceiver.

The source code can be found on github. This archive contains two arduino projects:

The ZG-01 protocol is decoded using a simple state machine. On each falling edge of the clock line, a sample of the data line is taken until a total of 40 bits is received. If the time between a bit and the previous bit is longer than 2 milliseconds, it is assumed that a new 5-byte frame has started.

To control the NRF24L01+ wireless transceiver, we use the gcopeland fork of the RF24 library. This library has several important fixes over the original RF24 library (and is used in the receiver as well).

The wireless message consist of 7 bytes:

The ESP version of the software uses MQTT to publish the measurement values, on the following topics (retained):