Github links to the project of Marcel Meek / TTN Apeldoorn: 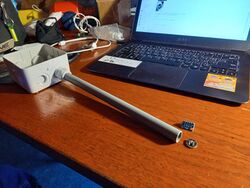