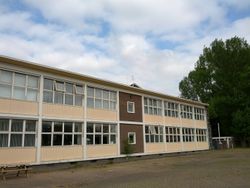 Roof is looking much better now

This project consists of several small sub-projects related to radio reception at RevSpace. Reception is based (so far) on DVB-T dongles using an RTL2832 chip to do SDR (software-defined-radio).

To receive signals from the relatively low frequency "HF" band, we have a ham-it-up board. The ham-it-up converts signals from 0-30 MHz up to 125-155 MHz, this makes is possible to use an RTL2832-based dongle to receive them. Right now we are experimenting with receiving HF on the discone: pskreporter makes it easy to plot a map.

Stuff we can implement 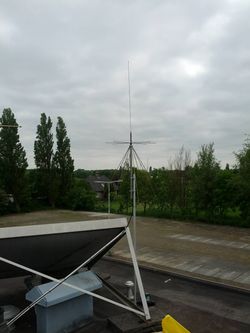 For generic radio reception in the VHF/UHF bands, we have a setup consisting of a discone antenna (ICOM AH-7000) on the roof of RevSpace and an RTL2832 dongle (R820T tuner). A simple filter (1/4 wave open stub) has been built to suppress very strong P2000-pager signals.

For tracking high-altitude balloons, we have a setup consisting of a collinear antenna for 70cm on the roof of RevSpace, a so-called hab-amp (bandpass filter for 430-440 MHz and low noise amplifier) and an RTL2832 dongle (FC0013 tuner). For more information, scroll down!1

connecting to VNC from inside the revspace network

To control the HAB tracker PC from the other PC over VNC (example for Debian Stable):

connecting from outside the revspace network

* Create an SSH connection to the revspace network, creating a tunnel for VNC: 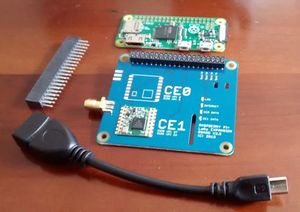 To receive LoRa telemetry from HABs in the 70cm band, we have a LoRa tracker:

To run the LoRa gateway software on the pi:

If all is right, you see an orange and green light on the LoRa shield. You'll see the RSSI change a bit every second in the display of the gateway software.

Configuration to receive SSDV from PE2BZ:

In this project, we try to receive amateur satellites and process data like telemetry. There are several amateur satellites in orbit right now, some of which transmit in frequency range of our HAB setup. Signals outside of the 70cm band can only be received with the discone antenna. This antenna might not be the best for picking up weak signals. However, since we have line of sight as soon as it's a few degrees above the horizon it should still produce some interesting results.

We have already managed to receive (but not decode yet) signals from the STRaND-1 and HOPE-1 (HO-68) satellites.

In the future, we plan to receive and decode telemetry from the existing Delfi-C3 and its successor Delfi-n3xt (launched in November 2013). 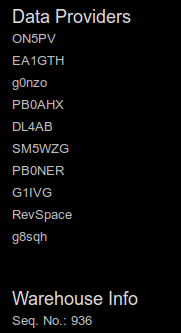 RevSpace (and nine others) just decoded and reported a packet

Delfi-n3xt has heard, but not yet decoded. Instead we have been focusing on the FUNcube-1 cubesat. As of editing this page (25 hours since launch) we received 113 packets. You can see up-to-date receiver statistics here. The FUNcube warehouse is the central database where radio enthusiasts all over the world can submit their decoded telemetry data to, so the FUNcube team always knows whats going on. 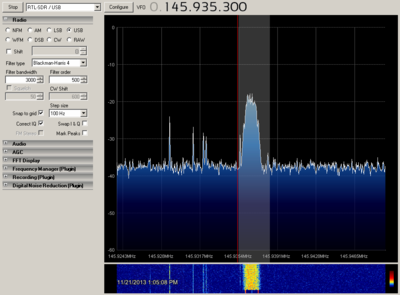 Project page for the high altitude balloon tracking/listening station have set up in the space. This information is processed for the habhub.org map

To build dl-fldigi on Debian Unstable:

You need to have at least the following packages installed (very incomplete list): gettext, autoconf