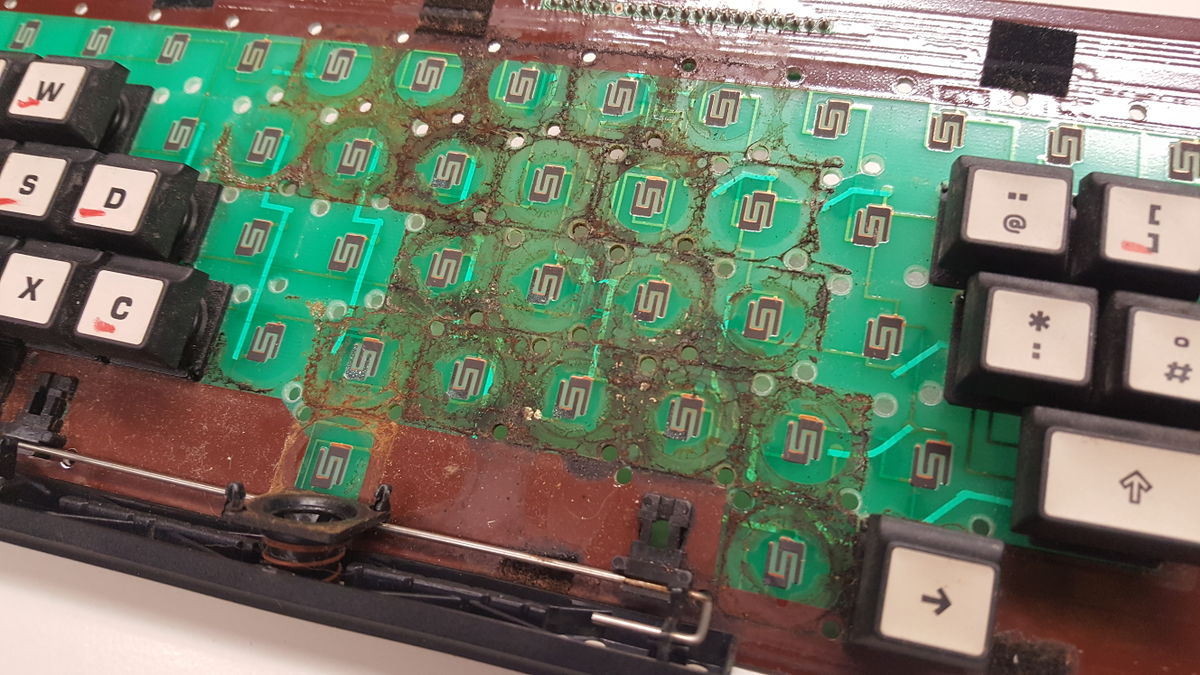 I fixed a few dozen "rotted through" traces, and thought I had found all of them, so I had good hopes that this would fix at least most of the non working keys, but when I tested the P2000T at home I found that most dead keys were still dead! I did found that the table above needed a few fixes, (X and Y seems to be interchanged, as lines are labeled Y 0 to 7 and X 0 to 9) especially the "right arrow" and the "1/4" symbols in column 4 of the table corresponded to the " ' " and the " [ " keys, and also that CLRLN was part of the numerical keys. When I encircled non working keys in the keymap I found that at least two columns were not working at all, the column lines of the columns 5 and 6 seem to be interrupted, as all the keys in these columns are not working. This warrants some more measuring of the connections between the motherboard (or the relevant buffer chip on it) and the keypads for this column line. I also noted that both the previous working space bar, and numerical keypad "0" key now produced long strings of spaces/zero's, interspersed with other characters, as if the keys were only intermittently seen. I suspect the P2000T actually has a bit of a design error in that there seems to be a timing criticality when reading keys, which are directly read as memory locations it seems. It might explain why the Z80 is clocked so low (2.5 MHz). Also it seems that for some odd reason the P2000T engineers thought the keyboard had to be interrupt based, but perhaps I'm missing something. Its just so hard to get good information about this system. I will stubbornly carry on trying to fix the keyboard, next mission is to measure the keyboard logic through to see what the problems are.

Just to see how the state of the keyboard of the only other P2000T I know, the one from Awesome Space, was like, I tried that one there, but I couldn't turn it on as it had a broken power switch. I couldn't repair the button, it was mechanically locked up, so I bypassed it, so that the P2000T would turn on if you plugged a power supply in it, perhaps I can source a replacement switch. I labeled the P2000T with what I had done, and tried out the keyboard, which was fully working on this P2000T. I can say that I have learned a few things, for example the key combination to format a cassette, and read its directory (catalog), and also the cload"name" command, and which keys were "dead" when using BASIC. so I now know what to expect. The -> and ] keys are not working in basic it seems. I have not discovered what the "code" key does.