The Philips P200T I received from Benadski as a donation came in a plain looking cardboard with large brown spill marks, it seemed sometime in the pas someone had spilled a lot of coffee (or something like that) over it, and the computer looked like a mess. It also did not come with a manual, or anything else, beyond a power cable. Especially unfortunately the essential BASIC cartridge was missing, as was the transparent cover over the what I presume was a place to stick some indexing card or maybe just a logo, as can be seen in the project picture. Without the BASIC cartridge the machine is essentially non operational. It does have a 4K monitor chip, but that contains just a kind of "BIOS" routines like memory testing, and serial printer and cassette drivers. It has no user interfacing code what so ever, not even a debug monitor. when you turn on such a P2000T you only get this screen: 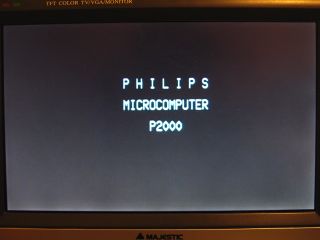