Difference between revisions of "Flighttracker"

Note: On Arch use the dump1090-git package from the AUR

Yet another fork of dump1090 has range support and can identify the origin of the aircraft.

The plan is to create a sonar like display of the current airplanes. dump1090 kan dump the raw msg (? hex encoded). There is a Python library which might make it easier to decode the messages from dump1090 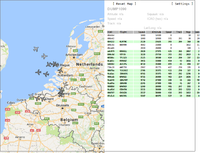