It creates a raw data file with a preamble consisting of 8 unmodulated symbols, a sync word, two reverse chirps followed by 16 symbols of random data. The I and Q samples are encoded as signed 8-bit words and interleaved (even = I, odd = Q). 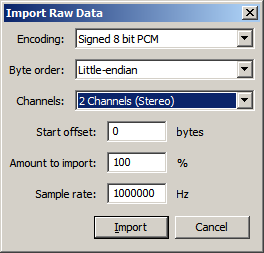 You can read this into Audacity (using it as a poor man's signal analyzer), by importing the signal in raw format and using the settings as shown on the left.