After working out the measurements into a LibreCAD drawing, it was not difficult to make a 3D model in OpenSCAD and print it. This allows me to make a new block and tune the holes. The sound of centuries ago can be heard again! Update: the 3d printed version is now playable, but it sounds so high you will probably not make many friends with it. 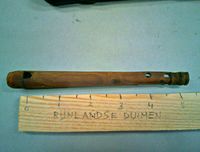 The units used in Leiden from the early medieval times are the Rhineland units. They are still known (The city hall still features a rod to calibrate rulers). The note "A" usually had a length of one foot (12 Rhineland inches). The "A" on this instruments is three octaves higher, so would use a pipe of 12" / 2^3 = 1.5 inch. To reach this note, you have to overblow the instrument two times, so the wave is standing three times in the pipe. The pipe therefore needs to be 3 x 1.5 Rhineland inches for the note "A". You can see this length in the distance between the centre of the blow hole and the second playing hole. This confirms that the instrument's lowest note is a "C", which is the perfect tuning for most children's songs in those days.